Manipulation of antiprotons, positrons and other charged particles

The ALPHA magnetic trap is a variant of a type of atom trap called an 'Ioffe trap'. 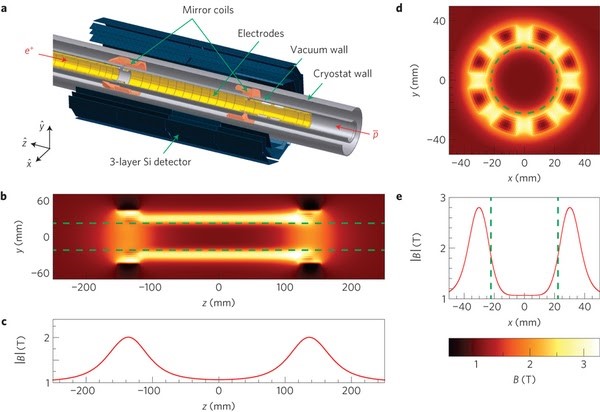 a A schematic view of the ALPHA trap. Radial and axial confinement of antihydrogen atoms is provided by an octupole magnet (not shown) and mirror magnets, respectively. Penning trap electrodes are held at ~9 K, and have an inner diameter of 44.5 mm. A three-layer silicon vertex detector surrounds the magnets and the cryostat. A 1 T base field is provided by an external solenoid (not shown). An antiproton beam is introduced from the right, whereas positrons from an accumulator are brought in from the left.
b The magnetic-field strength in the y–z plane (z is along the trap axis, with z=0 at the centre of the magnetic trap). Green dashed lines in this and other figures depict the locations of the inner walls of the electrodes.
c The axial field profile, with an effective trap length of ~270 mm.
d The field strength in the x–y plane.
e The field-strength profile along the x axis. (from Confinement of antihydrogen for 1000s)

To produce a magnetic field that has a minimum like this requires specially designed magnets. In one direction, we use 'mirror coils' (that look just like short solenoids) that increase the field nearby to make two `walls'. In the direction perpendicular to this, we need a more complicated multipole magnet. This magnet is made up of a number of wires spaced around a cylinder, where the current in each wire flows in the opposite direction to each of its neighbours. Depending on how many wires there are, you can get a differently shaped magnetic field. With four wires (the smallest number), you get a quadrupole magnet, with six you get a sextupole and eight you get an octupole. Any of these can be used to make an Ioffe trap, but in ALPHA, we want to place a Penning trap, which will hold positrons and antiprotons before they make antihydrogen, inside the atom trap. So as not to interfere with the Penning trap, we prefer to use a higher number of current wires. In the end, ALPHA chose to use eight, making an octupole.

Unfortunately, the magnetic dipole moment for antihydrogen is very small, and to make traps that are strong enough, we need very high currents. Therefore, we use superconducting wire in our magnets. A superconductor can carry very high currents without dissipating any heat, which makes it ideal for high current magnets like these. However, superconductors only operate at very low temperatures. Our magnets are placed in a bath of liquid helium, which has a temperature of 4.2 kelvin (-268.9°C).